The injustices in our patriarchal society are being recognized more and more. People all over the world have fought for equal rights for centuries and sacrificed their lives to get where we are today. But we still have a long way to go to an equal society.

Highly Offensive is our protest against patriarchal oppression. It reminds us of both the small nuances and the profound structures that keep us women down yet today.

As icing on the cake, we have let five amazing gentlemen create their own remix of the song.

Olofsson’s take infuses even more Kate Bush into the vocals than there was already while offering up an ambient outro. Rose’s is an IDM slow burner with a hint of house and no lyrics while monsøvic introduces an eastern flavour. Orange Crate shifts so far from the original that it is almost unrecognisable and could be GoGo Penguin tuning up, while Westling’s sticks closest to that original concept, while somehow managing to turn it into an outright dance track in the manner of Iceland’s Sykur.
– David Bentley, Nordic Music Scene

On January 18, 2019, we released our third album Regeneration on Comedia.

“Yes, it affects this record, it actually does.” “Music I want to close my eyes to.” “The carefully written lyrics weigh heavily”, “There is a feeling of light, creamy caramel over this album … it melts in your mouth but sticks a little, a little in your teeth, and one gladly takes one more.” “A little like the best kind of intoxication.”
– Stina Tobiasson, Lira

“Full of songs that bends and bowes and grows into organic arrangements. And in large parts, the album is a
settlement with the world order, not least with distorted gender roles.
– Esmeralda Moberg, Klingan in Swedish Radio P2

“It’s a feminist statement par excellence in parts but also an excellent record featuring a subtle cabaret style, interspersed with freeform jazz improvisation.” “Lead vocalist Jenny Nilsson delivers a highly Kate Bush-like song in a manner the Bexleyheath lady (Kate) would undoubtedly admire and then does it again and again throughout the album.” ”I recommend everyone listens carefully to their brilliantly crafted lyrics.” “Emotions vary from sadness to playfulness; it is light but dark at the same time.”
– David Bentley, Nordic Music Scene

“Cure-a-Phobia acts with finesse and feminist anger”.
“The outcome, as it appears on this eleven track album, is a refined variant of the concept of origin: slightly more subdued and a bit more pop-oriented, but still playfully scattered and quite wide sprawling. Imaginative arrangements and a studio with swing doors …”
– Håkan Engström, Sydsvenskan

Haven’t we all heard “Barbie Girl”, Aqua’s cheerful, pink shimmering although ironic pop hit from the 90’s. But what is the lyrics really about?

Barbie lives in an artificial fantasy world. She is called bimbo and you can do whatever you want with her. Brush her hair, undress her anywhere, touch her perfect body and play with her whenever and how you want. Our interpretation of the song highlights the underlying dark and skew in the lyrics. It’s no pleasant fantasy world Barbie lives in. Under the perfect surface, patriarchal structures, absurd body ideals and double standards hide. Barbie is called bimbo because she wants to please and adapt to the norms. She is constantly observed and judged and is always expected to be available. She should always have a smile on her lips, but she should not enjoy herself; she only exists to please others. Last year’s viral campaign MeToo has forced society to open its eyes a bit of sexual harassment and abuse of women. But how far have we actually come when the US president, a year after MeToo, says “it’s a very scary time for young men” about the men who are being accused. We mean that it has always been scary to be a woman, young and old. It’s time for a change, and Trump and his henchman be scared for a while!

Cure-a-Phobia makes the song completely there own and the on the surface holy lyrics  is given a new and darker meaning. Gorgeous.
– Editorial’s Favorites in Hymn 2018

La Chanson du Cochon or the Song of the Pig, was released 5th of september 2018 on the label Comedia.

Pollution of sea and nature. Descent and exploitation of animals and plants. Devastation of rainforests. Limitations on human rights. Racism, homophobia and misogyny. Class differences… We are Generation Ego.

This song is a call for humanity to start taking care of our world and each other. To make the world a better place we must all take responsibility for our actions.
Who is actually the pig? The little harmless animal that is exploited and slaughtered by man or the human pig, who ruthlessly spoils the world for its own gain?

Our second album, was released on March 1st 2014 on the independent label åddbåpp produktion. The album was released digitally but a limited edition vinyl records is also available.

Like small scared sparrows, Cure-a-Phobia took their first stumbling step on stage with a secret plan – to save the world.

This quirky superhero quartet, known for it’s theatrical performances, crazy pranks and fearless appearances, is now writing a new chapter in music history. With music as a weapon, the band wants to call for change, make us listen to our inner selves and follow our hearts.

Like molluscs during ongoing evolution, Cure-a-Phobia has also climbed out of the sea and made itself at home in the big city’s chaos. With electric shocks, lost bird feathers and toy piano, they have cooked up a second album that gives the strength and courage to fight for humanity.

”Playful and headstrong. This Malmö quartet makes very unique music with a touch of jazz, pop and what sometimes, for lack of a better term, is called cabaret music, but puts their very own signature on it.” ”It all sounds theatrical, playful, sometimes a little sorrowful, and very odd in a good way.”
– Rasmus Klockljung, Lira

”If Kate Bush grew up in the circus and had cabaret jazz in her headphones, she probably would have sounded like Cure-a-Phobia does on their second album,” ”The arrangements are wayward and without any reference”
– Ola Claesson, Smålandsposten

”There is something fundamentally playful with Cure-a-Phobias music”, ”being experimented without actually going outside the box.”
– Christer Paulstrup, Ystad Allehanda

We are in the borderland between night and day. Together with the moth, we flee a harsh and cold reality and dream away to a permissive fantasy world full of light and warmth, closeness and consideration. In these times we feel that it is extra important to spread love, understanding and openness. We are very proud of this single and video and hope you enjoy them as much as we do.

”Along with a fragile and rippling new single comes an equally beautiful video. The video dances like a fairy upon morning dew, gentle and feather light.”
– Pontus Berg, Gaffa.se

Our debut album Water, was released in February 2012 on the Malmö label åddbåpp produktion.

”They build a playful, theatrical structure”, ”The album is full of clever, quirky surprises which the band picks up and follows to the end of the road.”
– Ralph Bretzer, Skånska dagbladet

”Every song is a musical and melodic experiment that feels guided and molded, yet full of playfulness and experimental debauchery”, ”On the whole it is wilful, unexpected, delightful and very, very good.”
– Maria Stock Gréen, Lira 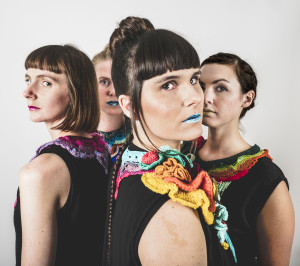